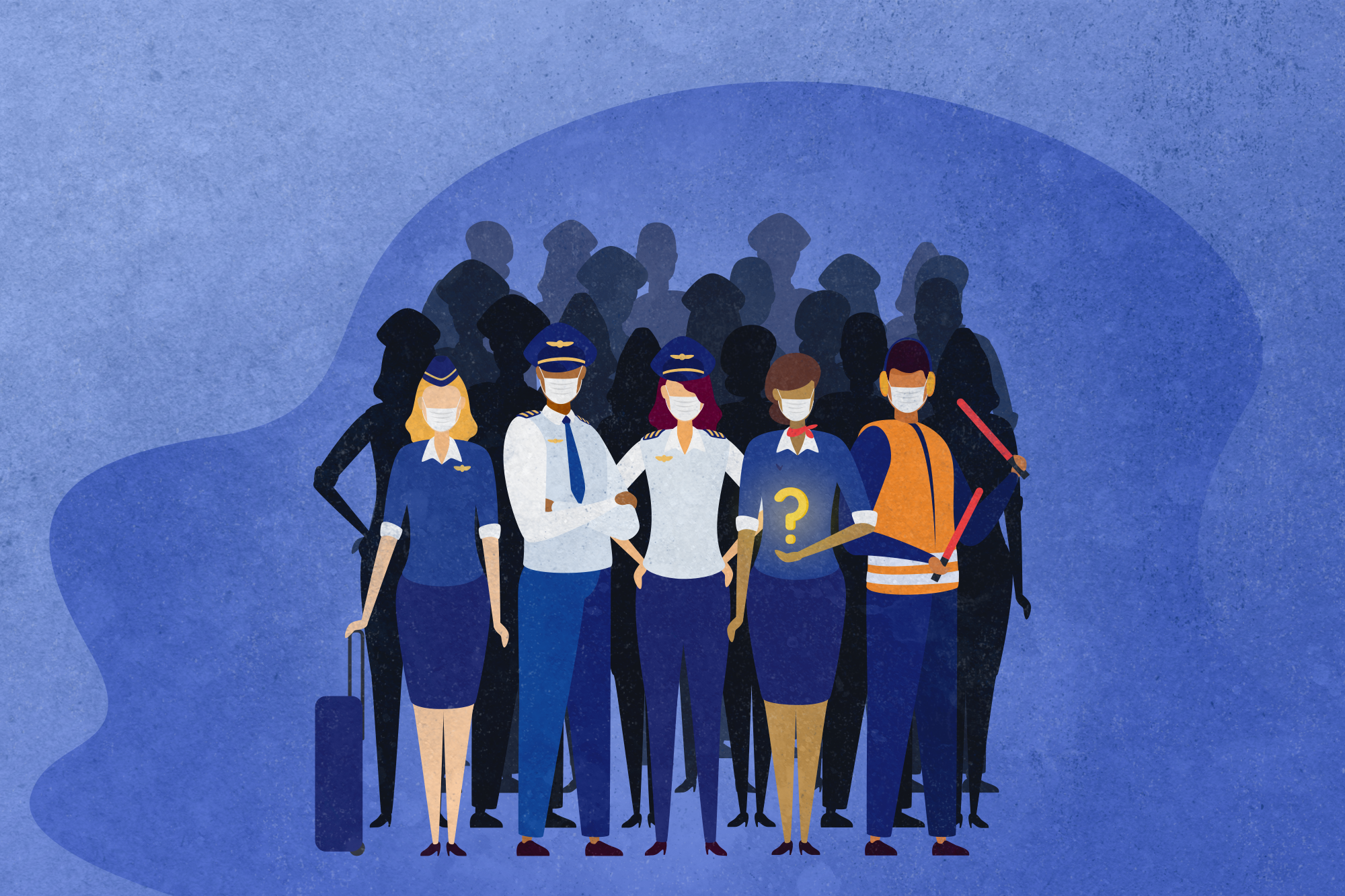 Throughput at U.S. airport checkpoints, TSA figures show, is rising fast from its April lows. Twice last week, volumes topped 600,000, compared with fewer than 90,000 in mid-April. It’s still a small fraction of what a typical June looks like, but people are indeed traveling more as summer begins. Green shoots, perhaps.

But there’s a reckoning coming.

Airlines may be adding back flights and re-opening routes, but major U.S. carriers say their revenues are about one-quarter what they had planned for the summer. And it could take two or three years for demand to recover to pre-Covid levels, particularly for long haul international flights. In the meantime, the industry has no choice but to shrink.

When Congress passed the CARES Act stimulus earlier this year, it stipulated that airlines taking federal payroll support funds would have to avoid involuntary layoffs or furloughs through September 30. So for legions of airline workers, winter is coming as that fateful fall date approaches.

Just how much airlines will shrink remains uncertain, even to CEOs. But clues abound from carrier fleet plans. Cowen & Co., an investment firm, said earlier this month that the U.S. fleet could shrink by more than 20 percent by the start of 2021, a rough guide to the shape of the industry heading into next year.

Cowen estimates that between 800 to 1,000 aircraft in the U.S. fleet might never return to service. Some fleet types will be gone permanently. Delta is retiring its fleet of Boeing 777s and MD-80-series aircraft, while American has said all Boeing 767s will exit the fleet. Alaska has signaled that part of the Airbus A320 fleet it inherited from Virgin America will be retired earlier than planned. And airlines have not exactly been rushing to order new aircraft from Boeing and Airbus (not to mention that hanging over all of this are the continuing Boeing 737 Max travails, which is a dim silver lining in that fleets already were growing more slowly than planned for this year).

Earlier this year, Southwest shocked the airline world when CEO Gary Kelly warned that involuntary furloughs — the first since Herb Kelleher and Rollin King sketched out the carrier’s plans on a cocktail napkin — might be in the offing. Since then, the industry as a whole has come off bottom, with traffic returning. But airlines are pressing ahead with headcount reductions through voluntary separation and buyouts. Details vary from carrier to carrier, and airlines and unions are keeping mum about ongoing negotiations.

Delta, for its part, is offering cash severance, medical and flight benefits. And last week, the Atlanta-based carrier notified its pilot union that it could furlough 2,500 pilots later this year. United is aiming to reduce its management and administrative staff by 30 percent and more than 1,300 have taken the carrier up on its offer of cash and benefits.

Southwest is avoiding the involuntary furloughs Kelly warned about and is offering two options: Extended unpaid leave or voluntary separation, which includes generous cash severance, flight benefits, and at least one year of medical benefits. American continues to trim its union and non-union workforces through buyouts and early retirements, and CEO Doug Parker says the company’s “stretch goal” is to avoid involuntary furloughs and layoffs after October 1, while warning that the carrier doesn’t know what size it will be. JetBlue made news this month when a leaked memo said 300 employees could be laid off after October 1.

Notably, there are exceptions, as the pandemic has affected network carriers more harshly than leisure-focused low-cost carriers. Allegiant has said its ultra-low-cost business model and leisure network has afforded it relative strength and therefore does not foresee the need for further reductions in its labor force beyond the pay cuts and voluntary leaves many of its staff have taken. Hawaiian also is taking a wait-and-see approach on reductions, but that is driven by its home state’s strict quarantine rules. And Frontier also said that it had offered voluntary separation, but it now does not forecast needing to reduce its headcount further.

The Covid pandemic, of course, is a crisis unlike any other in the century of commercial air transport’s existence. In the past 20 years, the industry has weathered the Sept. 11, 2001 terrorist attacks and a financial crisis, responding with a wave of consolidation. Bankruptcy isn’t likely this time around, as airlines still have access to capital, as a flurry of recent stock, bond, and asset sale transactions clearly show. No U.S. airline is anywhere close to running low on cash.

This pandemic is especially different, though, for employees. For one, unlike in past crises the pandemic has brought the global airline industry to its knees, and no part of the world has been immune. After the two prior industry shocks, U.S. pilots, flight attendants, and other skilled professionals could leave the U.S. to take highly paid jobs with fast-growing Gulf carriers, Asian carriers, Latin American carriers, and so on. Pilots also had the option to fly for cargo airlines as international trade expanded. Both of these relief valves are gone. This, as it happens, gives U.S. management teams a stronger hand when negotiating with unions.

For unions themselves, the willingness to accept concessionary contracts, beyond voluntary separations, is low given the absence of the bankruptcy threat to force their hand. In addition, they see more potential relief in Washington, looking to the federal government to provide another round of protection.

A coalition of unions is now calling on Congress to extend the CARES Act payroll support through March 2021, warning that “mass layoffs” will occur in October without the additional funding. The Allied Pilots Association (APA) representing American’s pilots is going further, proposing that the government support airlines by buying seats and leaving them empty, to ensure social distancing. It remains unclear if Congress or the Trump administration have the political will or appetite now for further stimulus programs, although the trajectory of the pandemic and the ensuing economic disruption will impact their calculus.

Given that further government aid remains uncertain, bankruptcy isn’t an option, and lucrative foreign employment (for pilots) is no longer an escape valve, unions have had to be creative in their negotiations with management. Most unions and airlines contacted for this story declined to provide finer details of the packages they’re negotiating, citing ongoing talks. But larger themes emerge. “The old playbook is gone,” an APA spokesman said.

The old playbook usually resulted in the most junior and least well-paid employees being struck off the roster first. On the plus side economically speaking, that left airlines with their most experienced workers. On the down side, it left them with a more expensive workforce. And this is less of an option this time around, as airlines ground their largest aircraft, and thus have less need for their most expensive pilots.

APA said the early-out deal it struck with American saw 800 captains of its largest aircraft opt out permanently, with another 4,000 or so choosing various forms of leave. This had the benefit of not only reducing American’s costs but also providing job and career advancement opportunities for junior captains and first officers to move to the other seat on the carrier’s larger aircraft, APA said. Leaving the most junior pilot workforce in place also allows American to best match its workforce to demand, since domestic short-haul demand is coming back sooner than long-haul international.

Another argument unions have against returning to bankruptcy-era concessionary contracts is that the price of fuel is at near-historic lows. In addition, airline revenues are more diversified now with ancillary offerings. And capital markets continue to lend and invest, showering airlines with mountains of cash, albeit mountains of debt as well — that’s an issue for another day. The point is, U.S. airlines do not face any imminent risk of bankruptcy or collapse if they don’t achieve immediate labor concessions. And that weakens their negotiating position.

It also means they can move slowly, and sure enough, airlines and most unions say they’re waiting to see what the landscape will look like after October 1 before making any permanent changes to collective bargaining agreements. The Southwest Airlines Pilots Association (SWAPA), for one, put on ice its talks with management over a new contract, after starting negotiations earlier this year.

In another change from the bankruptcy era (or almost any other era in airline labor relations), unions and management are playing nice and by all accounts are working together to stem the losses. Everyone agrees that workforces will be smaller. It’s just a question of how to get there, and airlines are allowing unions to suggest what methods of shrinking and cost-saving work best for their members.

Helpfully, early-out packages and temporary leave without pay — both voluntary — are useful tools in reducing headcount in a less disruptive way. Make no mistake though: These tools are not without risk.

On the one hand, airlines can cut costs by reducing the number of their most well-paid employees. But this could result in the most productive, experienced, skilled, and talented employees, with the best job prospects elsewhere, lining up first to take their buyout packages and flee. What’s more, when the recovery begins, airlines could be left without the human resources necessary to spool up — this could give an advantage to rivals like the Allegiants of the world who aren’t planning to dramatically downsize their staffing. Similarly, workers that take leaves of absence could opt never to come back, and even if they do, could take weeks or months of re-training to be ready to work again. There’s a risk, in other words, that airlines will overshoot in their autumn zeal to downsize.

But is there an upside to this situation? For some, possibly. Airlines that see a quick return to growth, like Allegiant, could hoover up talent let go by other airlines. Second, fuel is cheap, hundreds of used aircraft are on the market, capital markets are open, and airlines are cutting back routes and not using all their slots at constrained airports (JetBlue for one could get access to London slots much easier than it ever expected). With loads of available airline talent, furthermore, the time might even be ripe for a new entrant to capitalize on these trends. JetBlue founder David Neeleman’s Breeze is one that’s watching.

But like much else in this pandemic, uncertainty looms especially large, in labor markets no less than in other realms of the sector. The demand recovery is itself becoming increasingly uncertain, with Covid flare-ups in more than half of all states causing a new round of restrictions on businesses and even quarantine measures among states. The bullishness of just a few weeks ago, alas, was perhaps premature. Some airlines that recently reversed course, saying they’d shrink less than originally planned, are now returning to earlier, more dire predictions.

The pandemic’s increasing spread in the U.S. could indeed spur the federal government to pass another stimulus measure, potentially saving more airline jobs, if temporarily. As of now though, a winter for labor looms, starting October 1.